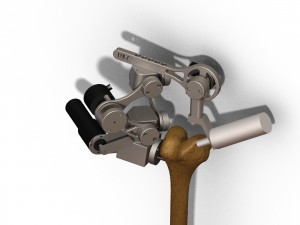 Knee replacement surgeries at this time typically require planar cuts that involve removing healthy bone and damaging soft tissue surrounding the area to insert an implant. A trivial solution is to remove only damaged areas of the joint to conserve bone and minimize soft tissue damage; however, that requires precise three-dimensional curvilinear cuts that no existing commercial product can produce accurately, reliably and inexpensively.

Motivation behind this project was to design a solution capable of meeting those requirements based on the dynamic physical constraint concept developed by Nikolai Hungr. The goal is to design a compact, semi-active, haptic interface that can assist a surgeon in making cuts by guiding the cutting tool along a predetermined surface, emulating a realistic hard surface. This report presents the details of the design of the control system and recommendations for future work focusing on the potential accuracy and precision, and user control of the surgical tool.

Results of the project are inconclusive as design and machining flaws of the mechanical structure prevented any meaningful tests that could verify the functionality and usability of the control system. 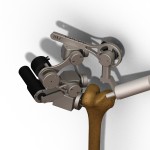 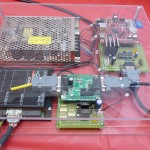 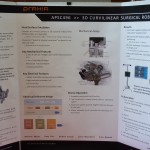 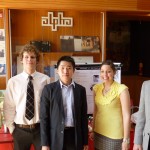 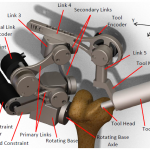 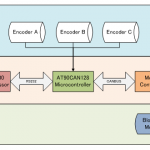 Engineering analysis and design completed in the development of the Praxia device focuses primarily on the basic layout and design of the mechanism that will be used to implement the hard constraint and improving the speed of the system by using a microprocessor that can perform floating-point operations. The design presented here redevelops the four-link mechanism previously used by placing the hard constraint and the motor at the base of the device, where the device is mounted to the bone. Significant effort has also gone into minimizing the size and weight of the device, while still using strong materials that can be effectively sterilized. This section describes the device’s design and design decisions that have been made, starting with an overview of the mechanism, and finishing with the device’s link and joint designs.

The Praxia control system has peripheral devices – three encoders and a motor – that are connected to the core control system. The core control system consists of three subsystems – a microprocessor development board (Beagleboard with OMAP3530 running QNX), a microcontroller development board, and a PID motor controller. Together, they allow the robot to emulate a surface by tracking the positions of the joints, determining location of the tool head with those position values and changing the location of the Hard Constraint that is attached to the Hard Constraint Motor.